skip to main | skip to sidebar

The Ugly Truth About “Uggs”

In Australia where they were invented, “Ugg Boot” appears in the dictionary with a little footnote: “Derivation: ugly”. Is there any less feminine way to finish off an outfit? In addition to their clunky, sloppy looks, they are just about the worst things you could wear on a day to day basis for walking. We have all seen the girls walking through the mall with their Ugg boots on, their feet practically collapsing into themselves. The rubber is usually worn down completely on both heels and they are dirty as sin. All of us are guilty of buying the latest and the greatest names and what’s the most popular thing to own. In the case of Ugg boots, not only do they come with a high price tag, they also come with a price for your delicate feet to pay.

Ask any Ugg owner what makes her boots so special and you will hear the same words over and over again. “They’re comfy, they’re warm, and they feel so lovely on my feet.” These are the same words you’ll hear from your grandfather after he slips on his new pair of slippers he just picked up at the dollar store. “I am an absolute believer in the the Ugg boot. I don’t use them for the impact or the style, it’s because they are so comfortable and warm”, says Katie Melville, 25, who works for an advertising agency and is now on her 5th pair. Her friend Lexy, a trainee chef, has also been won over by how “practical and comfortable they are”.

Apart from the notion women are supposed to suffer for their fashion (That’s why God invented stilettos), let’s examine the comfort of the things. They may be warm but they sure are not waterproof. “I wore them in the snow last year,” says Lexy. “My feet were soaking and it was a nightmare!” She also admits if it’s not below freezing, her feet are actually “too hot”. Meanwhile Katie says: “On the box it says you should wear them without socks. But if you do they are really quite smelly.” The reason why the Australian manufacturers recommend you don’t wear socks is because Down Under the Ugg boot is NOT worn outdoors. (Hence the lack of waterproofing.)

It was when the Ugg boot arrived in America in 2000 when Oprah Winfrey spent $50,000 buying pairs for her staff of 350 and included them on her Oprah’s Favorite Things show- that it occurred to anyone to wear them in a place where strangers might see them. The fact the Vogue magazine went mad for them- as did Kate Moss- probably explains why they took off so quickly. 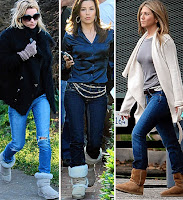 What people do not quite understand is that just because Uggs are not stilettos, they absolutely come with their own set of dangers. For one thing, they provide absolutely no support. They do not have a firm heel counter to prevent inversion or eversion. The sole is made of very soft material and does not hold the foot in position during gate. The lack of support can also cause lowering of the arch which can cause tendon strain. In addition, the warm interior is a perfect place for bacteria to breed and spread to your toes and toenails like wildfire, especially if you are unfortunate enough to find yourself submerged in water or a foot of snow.

So next time you’re in Norstrom’s and your considering dropping 2 bills on a pair of Ugg boots you may want to consider the long term affects of your purchase . If the name and style really means that much to you, save them for inside the house.

I was actually going to look into getting a pair of Ugg mules...but I really liked the boots. Until I read this. My arches are already terrible and from what I just read here, Uggs will make them even worse. I never really thought about shoes causing inversion and eversion of the ankles/feet, and as an OT student I now realize how important range of motion is for all the joints of our bodies. And I spend a ton of time on my feet...thanks for the heads up on Uggs.


* ONLY HERE YOU CAN FEEL CONTINUOUS VICTORY *